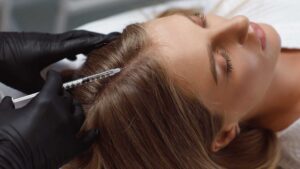 Thanks to this process, the mixture is directed to the entire skin through the capillaries, nourishing the hair, eliminating circulatory disorders, and as a result, hair loss stops. Hair follicles thicken, a brighter and more vivid image is obtained. One of the most important effects is that new hair begins to grow from undead, active hair cells.

To whom is hair mesotherapy applied?

In this sense, hair mesotherapy can be applied to anyone who is facing the problem of hair loss. Since it is a treatment method without side effects, the age and gender difference is not important in this sense. Its application by the microinjection method may create the impression that it is a painful procedure, but hair mesotherapy is a painless and painless procedure.

The application method of hair mesotherapy differs in terms of gender. The reason for this can be shown as occurring due to variable problems in women and men. In the vast majority of men, hair loss occurs due to genetic reasons. For this reason, in addition to the application of mesotherapy, the use of a special drug may be in conjunction with the treatment in order for the treatment to be permanent.

In women, this situation is different. Women mainly due to hormonal reasons; They may experience hair loss due to many reasons such as genetic causes, before and after birth, stress, iron deficiency. In this case, the underlying pathology is primarily eliminated and then mesotherapy procedures are applied.

How long is hair mesotherapy effective with the procedures performed?

How is Eyebrow Transplantation Performed?